The Royal Palace in Madrid with Madrid Discovery 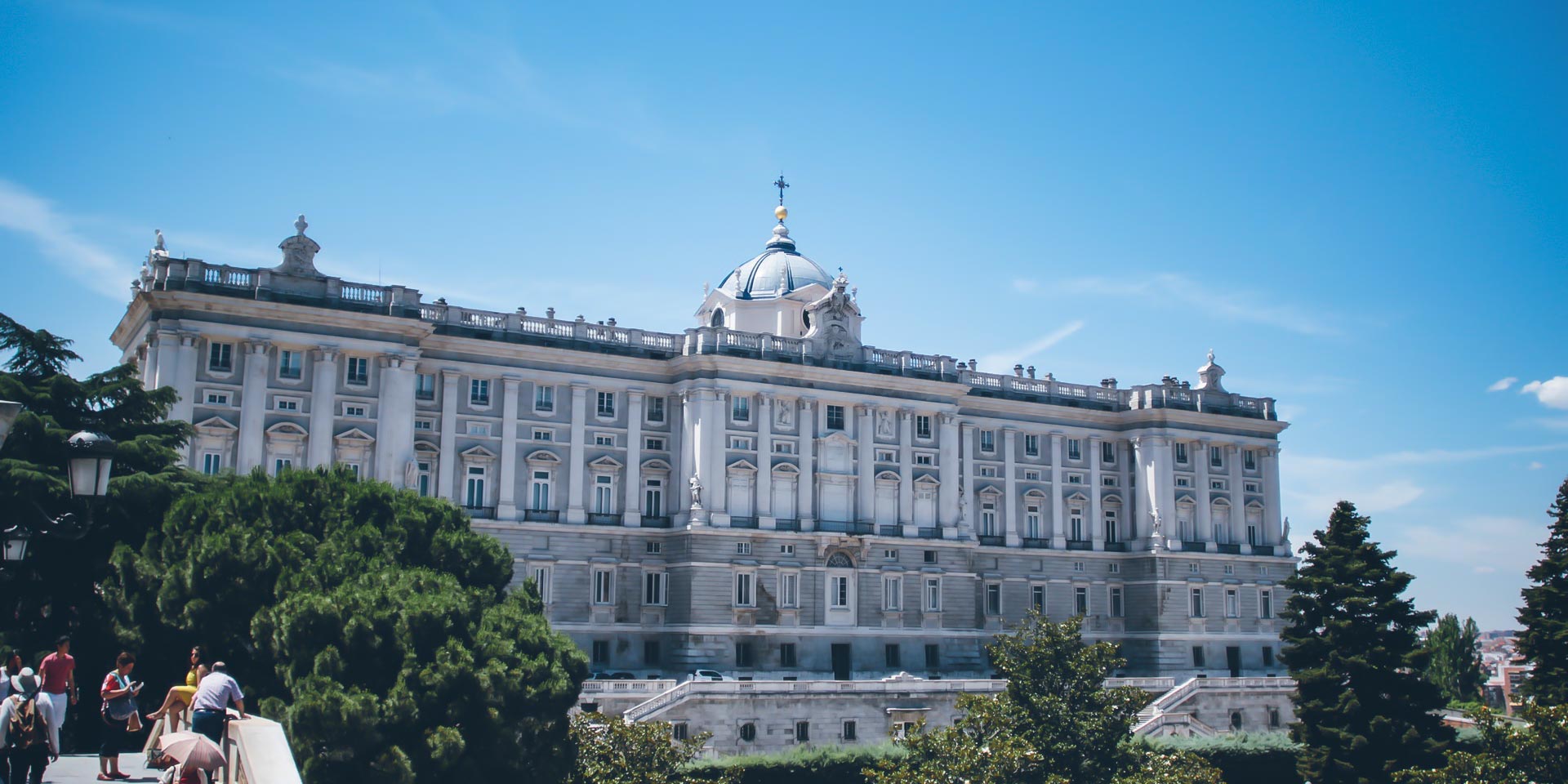 The Royal Palace of Madrid is one of the monuments to see during your holidays in the Spanish capital, rich in history, it will surprise you with its rooms, each one as magnificent as the next and the richness of its decorations.

Go on a unique visit where you will discover an impressive collection of clocks, paintings by famous painters, tapestries, royal jewellery, the royal crown and even a very rare collection of Stradivarius violins unique in the world.

What to see and do at the Royal Palace in Madrid?

Before starting our guide to the Royal Palace of Madrid here is a list of the rooms to visit in the palace. We have not detailed everything so as not to spoil your visit and leave you with a bit of surprise for a successful visit.

You will have the possibility to visit :

History of the Royal Palace of Madrid

The history of the Royal Palace of Madrid begins during the reign of Emir Mohamed I (9th century). He chose to build a fortress in the city of Madrid to protect the ancient Spanish capital Toledo from the advance of the Christians.

It was not until the 14th century that the kings of Castile built the first Alcázar, bearing the name of Antiguo Alcázar. It was Charles I of Spain and his son Philip II who were to carry out this transformation, which was to turn the ruins into the residence of the kings.

In 1734 a fire destroyed the Alcázar and it was Philip V who directed the construction of a new palace on the ruins of the two previous ones.

He appointed Filippo Juvara to build it, but the latter died shortly after the construction began and it was his disciple Juan Bautista Sachetti who completed the construction in 1738, seven years after the beginning of the works.

The first king to reside in the royal palace was Charles III, who was also the first to decorate it.

The greatest changes in decoration were made by his successor Charles IV, who decorated the Hall of Mirrors.

Studies have shown that the Royal Palace in Madrid is inspired by the organization of the Louvre in Paris made by Bernini. In both structures we find a square courtyard, a gallery and a main facade of the palace overlooking the military square.

The Royal Palace of Madrid has nearly 3000 rooms, a staircase designed by Sabatini with more than 70 steps, a throne room with a magnificent fresco by Tiepolo, a guard room formerly a ballroom, a royal chapel and a room dedicated to Stradivarius stringed instruments.

What to see at the Royal Palace in Madrid?

To give you a foretaste of the Royal Palace of Madrid here are in detail the most important rooms of the official residence of the kings of Spain.

The place of the armoury

The Armoury Square separates the Royal Palace from the Almuneda Cathedral. It is an ideal place to take pictures of the Royal Palace, and it is also from this square that you can enter the palace and start the visit.

During military graduations or events the Armoury Square is not accessible to allow the event to take place. If you are visiting the Royal Palace of Madrid we advise you to go to this square to start your visit and soak up the sublime royal decorations.

The main staircase of the Royal Palace has been designed to have a graceful and harmonious step.

This is possible thanks to the small spacing between each step making it very easy and pleasant to use.

Each step is carved from a single 5m long piece of Spanish marble. When you pass by this staircase take the time to look at the magnificent vault and its paintings which describe the Spanish monarchy of the 18th century. You will find many sculptures depicting royalty including two lions symbolizing power and Spain.

Charles III’s room is decorated in Rococo style from floor to ceiling. Very fashionable at the time of Charles III this joyful style represents the beauty of nature and oriental art. 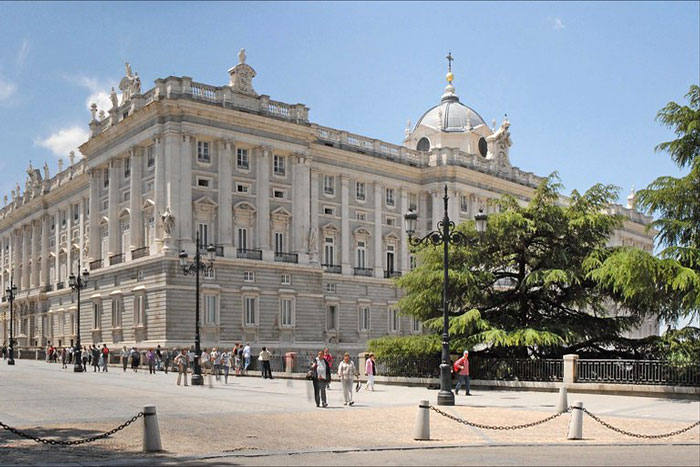 The chapel of the Royal Palace in Madrid is one of the most impressive rooms in the building, a real jewel you will discover a chapel with luxurious details and full of meaning.

To make the most of this room we recommend spending several minutes observing the details of the magnificent dome.

This room is one of the most eagerly awaited in the Royal Palace in Madrid. Stadivarius pieces are presented, 2 violins a viola and a cello. These four instruments were acquired by the court in 1775, they were regularly used for concerts and are still used for exclusive events in the royal palace of Madrid.

This hall is much loved by music lovers from all over the world both for its decoration and the pieces on display.

The king’s throne stands in a large room with red velvet walls and sumptuous decoration.

This room was completed in 1772 and the decoration has remained intact to the present day. Each decorative element is an allegory that symbolises the Spanish monarchy and its history.

It is interesting to be accompanied by a guide to be able to learn about the meaning of each element in this masterful room full of history.

The armoury and the royal kitchen

It is not possible to visit the entire palace (almost 3000 rooms) but you can visit the impressive armoury and the kitchen.

The armoury is located in the back on the right (when looking at the Almuneda Cathedral) of the main courtyard of the royal palace. For the kitchens we advise you to ask the staff of the royal palace whether they are open or not.

Visit the Royal Palace of Madrid with a historian guide

The Royal Palace in Madrid is one of the most beautiful palaces in Europe is one of the palaces that has seen the most kings and culture live within these walls.

The history of this building is very important to understand the evolution of the Spanish monarchy. Each room has a history and their decoration too.

Visiting it with a historian guide will give you a comfort in understanding the works and the meaning of the allegories present in the palace.

One of the great advantages of visiting the Royal Palace of Madrid with a guide and being able to spend more time in the rooms to appreciate its history and decoration.

You will learn how the kings used painters and artists to show its superiority and power.

The visit of the palace with a guide lasts almost 2 hours, very complete and rich in explanation it is an incomparable experience that awaits you.

Visit the Royal Palace of Madrid with Madrid Discovery

At Madrid Discovery we offer you a unique and luxurious experience in the Royal Palace of Madrid. Take a private tour of the palace with a historian guide and learn about the history of Spain and the Spanish kings.

Visiting the palace with Madrid Discovery is the assurance of a personalized and authentic visit. As soon as you book a tour, a personal advisor will take care of preparing your visit.

On the day of your visit your guide will pick you up directly at your hotel, transportation between the hotel and the palace is included in the price as well as fast entrance fees.

You won’t have to wait to get home and enjoy a royal visit.

Changing of the guard takes place on Wednesday and Saturday of each week (except for official ceremonies or unfavourable weather conditions). You will be able to attend the Changing of the Guard show every first Wednesday of the month (except January, August and September).

Visit the Royal Palace in Madrid with your company or on a school trip.

We work with quality partners who offer top quality services to meet your requirements and provide you with an experience worthy of your expectations.

We regularly welcome school students on a trip to Madrid and we are happy to organize visits to the Royal Palace of Madrid.

The educational aim of our teaching staff is reflected in the explanations given by our guides. We have developed visits to capture the attention of students and provide them with real added value to make their stay as beneficial as possible.

For more information about group visits to Madrid, the Royal Palace or the museums of Madrid, please contact us directly by email at info@madrid-discovery.com.

How do I get to the Royal Palace in Madrid?

It is very easy to reach the Royal Palace in Madrid, most hotels are less than 10 minutes walk from the palace and it will take you less than 15 minutes by taxi to get there from the most distant hotels.

The best option is to take a taxi to get dropped off right in front of the entrance.

More information about the Royal Palace in Madrid

Opening hours of the Royal Palace in Madrid

More information about the Royal Palace in Madrid

If you like to visit monuments and museums during your travels then this visit will be perfect, very pleasant to visit the Royal Palace of Madrid will not leave you indifferent.

To make the most of your stay we recommend you visit the Royal Palace of Madrid and then continue the visit with the Prado Museum and then visit the Reina Sofia Museum.

Posted by Madrid Discovery on 24 July 2020 | Featured
Comments are closed.